The Australian-built Spectrum chassis has taken another overseas title, Exclusive Autosport driver Konrad Czaczyk clinching the 2017 Formula Tour 1600 championship with pole position and a dominant Race 1 victory in the final round of the series at Canada’s Circuit Mont Tremblant. 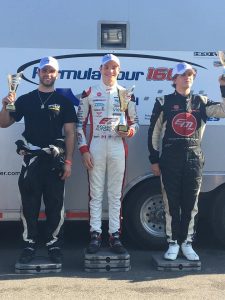 By virtue of his championship victory, Czaczyk has scored entry into the coveted Mazda Road to Indy $200k Scholarship Shootout, where he will compete against 19 other open-wheel champions from around the world for the scholarship to compete in the USF2000 Series.

Exclusive Autosport rookie Jacob Astren in the #95 Exclusive Autosport / Astren Motorsports Spectrum and Sabre Racing Cars Honda Racing/HPD came into the 2017 season on a driver development and testing program with the team. His talent behind the wheel took him straight into the full season of Formula Tour 1600 competition where he finished third in the overall championship and also earned the Rookie-of-the- Year honours.

Kellen Ritter, a Canadian karting standout, had a stellar debut weekend with Exclusive Autosport. He capped the weekend off with three top ten finishes, including a third place finish in Race 2.